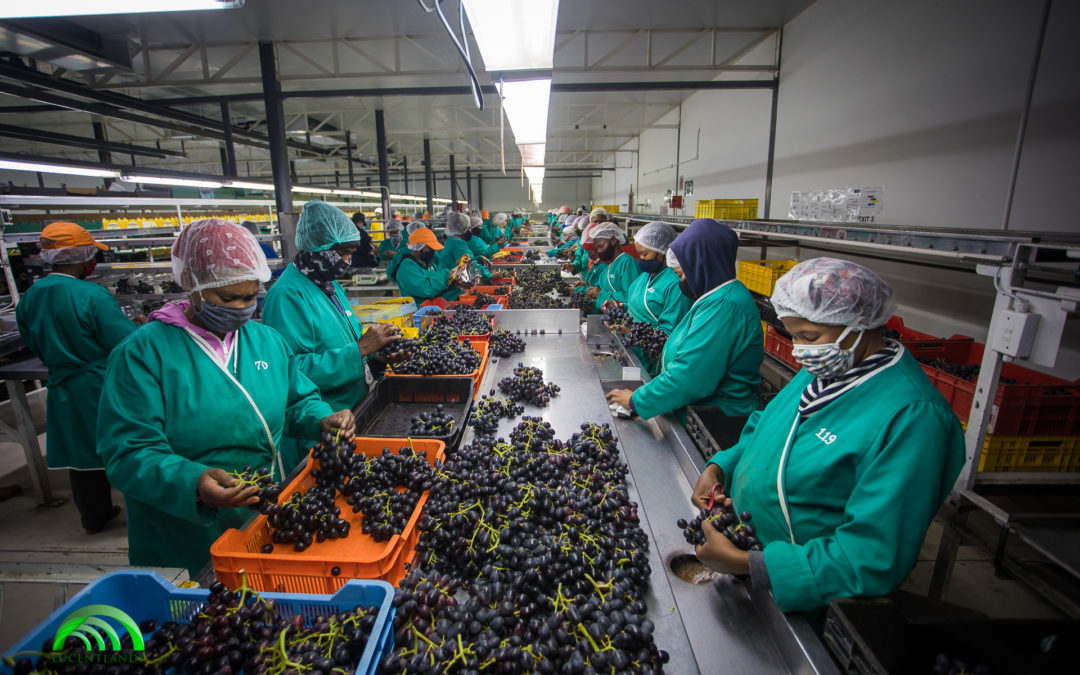 The South African table grape harvest is currently moving into the later part of the season. Productions in the early northern production regions have been completed and harvesting is currently in full swing in the hater Berg and Hex River production regions. The start of the season in December was slightly delayed due to cool spring temperatures. However, hot summer weather hastened the ripening process, and the harvest is now following the usual timeline.

Southern Africa is currently experiencing a very wet summer as part of the El Niña global weather pattern. This is excellent news for water security, with the country’s largest dams full and overflowing, as well as for drought-stricken stock farmers in the region. However, the excessive rain and flooding rivers bursting their banks has been playing havoc with summer field crops such as grain and maize. Rain is also detrimental for ripe table grapes, and this has had an impact on the grape harvests in the early regions.

Other major headaches for table grape shippers have been the numerous financial and logistical challenges that South African fruit exporters are currently facing. In addition to the sharp increase in global shipping tariffs and the worldwide shortage of reefer containers, inefficiencies, and infrastructural constraints in the Port of Cape Town, as well as South Africa’s other ports, are creating costly shipping delays for South African fruit. The need to improve port logistical infrastructure and to shorten the “dwell time” for vessels have been escalated to a national priority and the South African fruit industry is currently lobbying government to prioritise these much-needed improvements.

The Port of Cape Town is the port of shipment for more than 90% of South Africa’s table grape shipments, and along with these logistical challenges, it has the added weather challenge of high wind speeds that impede the loading process. 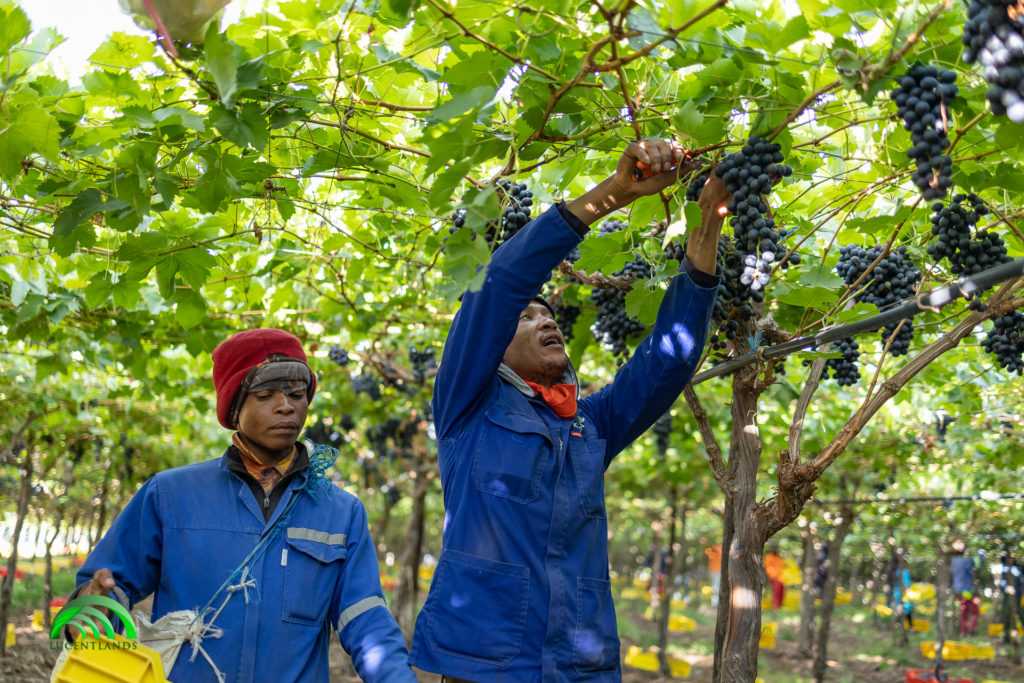 Every year, the South African table grape industry prepares a crop estimate for the forthcoming harvest, and this includes a range between the high and low ends of the estimate range. The current season estimate is expected to be between 72 million and 77 million 4.5kg cartons, a similar volume to the final total of 74.8 million cartons for the previous harvest.

Following this harvest’s initial estimates in October 2021, in the second estimate in February 2022 has seen a downward adjustment for the Northern Provinces production region, largely due to challenging weather conditions. At the same time, productions in the Orange River region have exceeded the initial estimates and have been adjusted upwards by up to 3 million cartons. Heatwaves during the harvest season have resulted in a considerable downward adjustment in the Olifants River Region. The second estimate has hardly changed the estimates in the later Berg and Hex River Regions. The Hex River Region has traditionally been the largest table grape production region, but the second estimate shows that the increased volumes in the Orange River region is narrowing the gap in volumes between these two regions.

The year-on-year increases in production over the past three years, from 61 million to 74 million, are due both improved yields following the drought period in 2016 to 2018, and additional productions from recently planted new vineyards.

Increasing use of overhead nets

One of the biggest general trends in fruit production in South Africa is the installation of overhead nets over crops and the trend is also being implemented by table grape growers in all the country’s regions. Growers are increasingly installing overhead netting to manage risks and optimise crop yields. Farming with grapes under nets requires 15 to 20% less water under the nets, which represents a significant saving. Nets create a protective microclimate under the nets to limit wind, sunburn, and frost damage. As the nets also keep the birds out of the vineyards, this prevents bird damage and the rotten berries that result from birds pecking the berries. Increases in the cost of crop insurance have also added to the motivation for growers to cover their vineyards with nets to prevent hail damage. 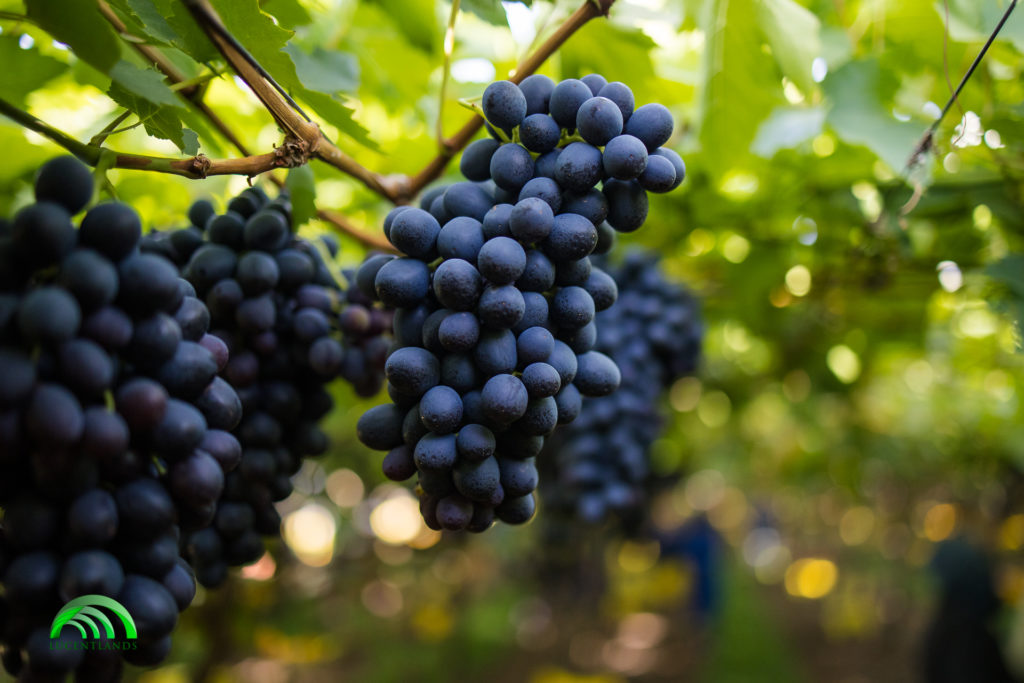 The introduction of new, sought-after varieties is a positive development in the industry because it also drives international competitiveness and industry sustainability. The new varieties are, amongst others, the ranges from (IFG) International Fruit Genetics, Sunworld, Guimarra ARRA, Grapa Ltd. and Culdevco/ARC. Most of these varieties are selected for their fertility and increased yield per hectare, their reduced labour requirements during the crop preparation process and for their resistance to damage caused by adverse weather conditions. A decade back, productions of 4 000 cartons per hectare were considered good, but with the newer varieties, it is possible to achieve productions of 6000 to 7000 per hectare.