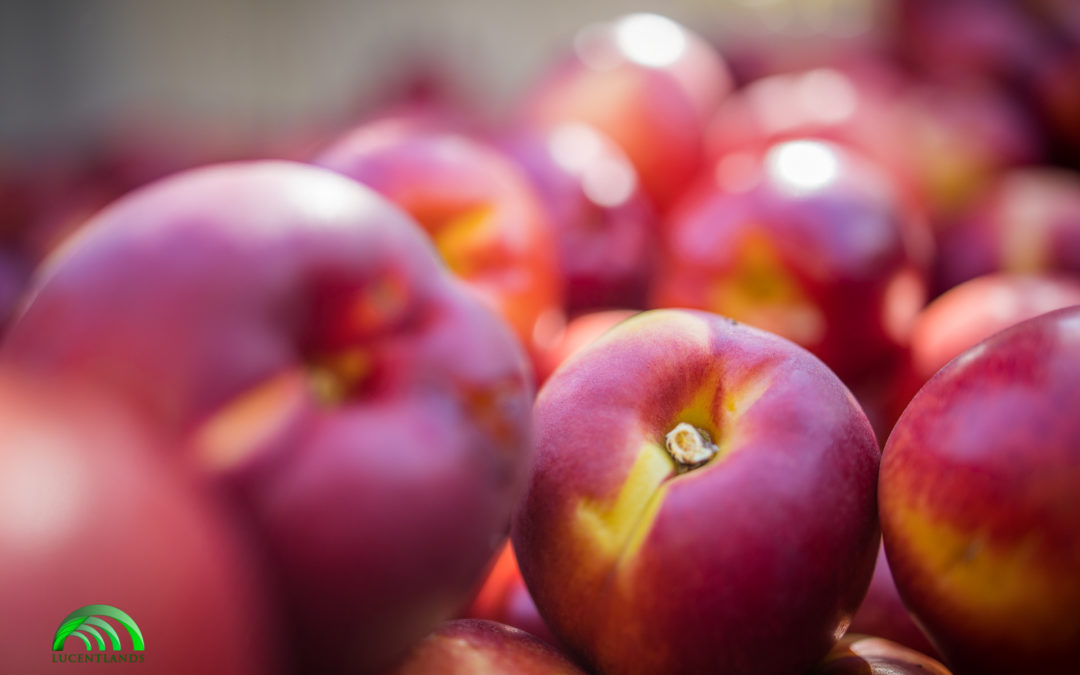 The South African stone fruit season has past the halfway mark and, by all accounts, it has been an excellent harvest season with good growth in production and exports. As stone fruit requires a Mediterranean climate for production, most of the stone fruit is produced in the Western Cape province, the only region which has this type of climate. In comparison with last year’s figures, productions have increased on most of the South African stone fruit types. Good winter rains and a cool spring followed by consistent warm weather has resulted in a considerably larger crop than last year. The crop has proceeded well to date and growers are expecting the total volume of stone fruit packed for the export market to be between 15 and 16.5 million cartons (5.25kg equivalents).

“Good climatic conditions and a rise in recently planted young trees of new cultivars starting to produce are boosting out export crop,” said Hortgro’s Jacques du Preez. “Normality has returned to the stone fruit industry following the drought years from 2016 to 2019 as this period distorted reference points and preceded the big increase in volumes that the industry experienced during the 2020/21 season,” said Hortgro in a statement. This is an important turnaround for the country’s stone fruit industry as difficult circumstances over the past few years (severe drought, the Covid-19 pandemic, rising input costs and logistical threats), have posed a significant threat to the long-term sustainability of South African stone fruit growers.

The global logistical challenges resulting from the disruption caused by the Covid-19 pandemic, as well as the inefficiencies in South African ports and wind in the port of Cape Town created significant logistical challenges for all shipments from South Africa. These challenges were at their worst during December and early January but have since improved to some extent and exports are currently continuing well.

The European Union receives approximately half of South African stone fruit exports, followed by the United Kingdom, which receives roughly a quarter of the county’s exports. Of the balance, around 20% goes to the Middle East, while the rest is split between the USA and Canada, the Far East and Africa.

Good growth in the German Market

South Africa ships approximately 5% of the total stone fruit exports to Russia. The current invasion of Ukraine by Russia is of big concern to South African stone fruit and other fruit exporters as the disruption of trade due to the war and the proposed sanctions to be imposed on trade with Russia will have significant effects on the growing South African trade to this country.

The earliest and smallest stone fruit crop is the apricot crop and this year it turned out to be the best harvest in the last three years. These fruits grow mostly in the hot, semi desert Klein Karoo region of the Western Cape which were most severely affected by the drought. Subsequently there were concerns about the survival of the South African apricot export industry and the increases that the industry has seen last year and again this year have provided a welcome boost for the sector. In 2021 exports reached 683 000 cartons, and this year the expectation is similar re has been an increase in production of around 90%, with 672 000 cartons exported.

South African apricot production is predominantly aimed at processing (72%) and drying (16%). Of the 15% consumed as fresh fruit, 9% is exported and 4% is sold on the South African domestic market. Good conditions during the recent harvest provided the impetus for growers to export larger volumes of apricots that would usually have been sold locally. The biggest export market for South African apricots is the Middle East, which receives 52% of exports, followed by the UK at 19%.

Nectarines are South Africa’s second biggest stone fruit export crop and production is concentrated mainly in the Western Cape and Limpopo Provinces. The nectarine harvest is ending as it normally runs from October to March with peak intakes in November and February. Nectarine productions have also increased against last year. Growers are forecasting a 10% increase in the previous season, with the estimate currently at 5.57m cartons.

The peach harvest usually runs from October to February is currently close to complete. The industry is expecting export production volumes to reach 2.37m 2.5kg equivalent cartons, which is slightly down (-3%) against last year. Most of South African peaches are produced in the hot, semi desert Klein Karoo and warmer parts of the Western Cape. The biggest export market for South African peaches is the UK at 43%, followed by the Middle East at 39% and Europe at 10%.

Plums represent the largest volumes within the South African stone fruit category. Growers in South Africa’s Western and Eastern Cape cultivate a range of delicious red, purple and yellow plums, offering consumers a wide selection of flavours, textures and colours. The fruit, which are high in fibre and a source of vitamins A, C, and E as well as potassium and carotene, are available in South Africa’s export markets from January to May. South African plum growers have reported excellent crop quality this season and the South African industry has been running a promotional campaign on South African plums in the UK retail sector.

The plum forecast is around 4% higher than last year’s final totals and growers are expecting to pack and ship 15.7 million 5.25kg equivalents for the season. Of the stone fruit types, plums have the longest harvest season, running from November to April, with peak intakes usually harvested between week four to week eight (late January and through February). The total production of plums in South Africa is distributed as follows: 74% for export, 23% for local market sales, and 3% for processing. The biggest export market for South African plums is Europe, which receives 48% of exports, followed by the UK at 22% and the Middle East at 19%. 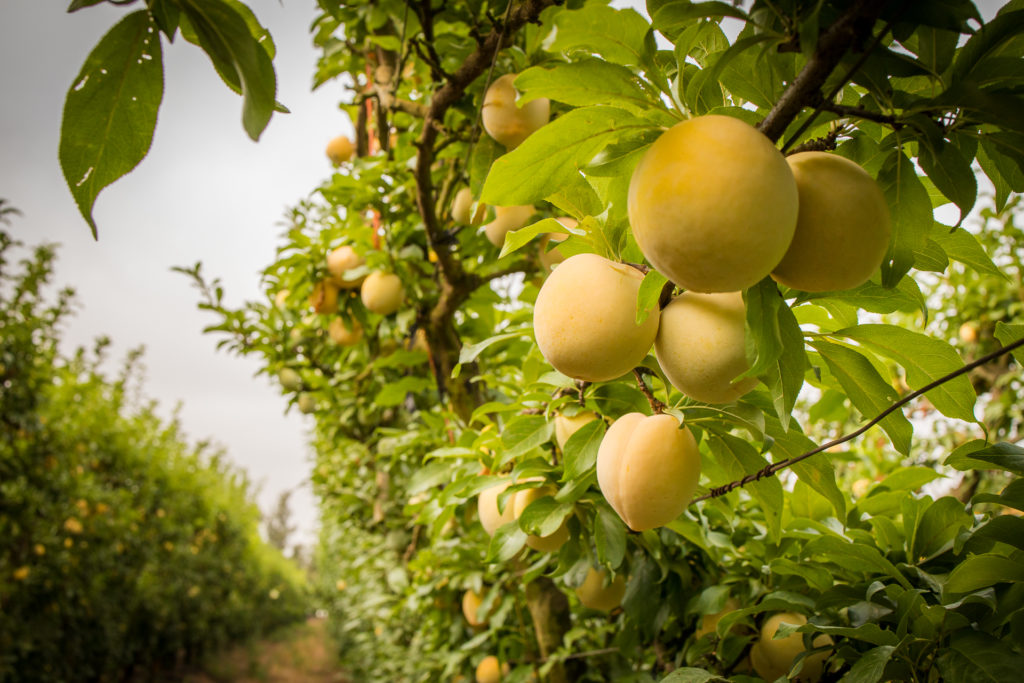 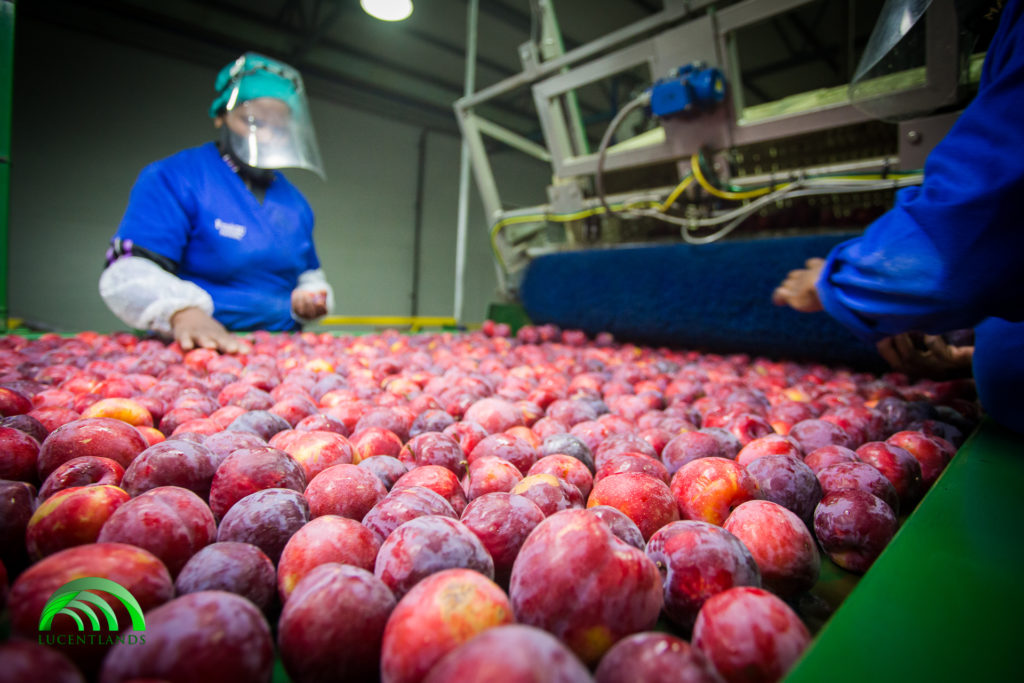 Plums on the packline, Photo by Dewald Kirsten, Lucentlands Media.